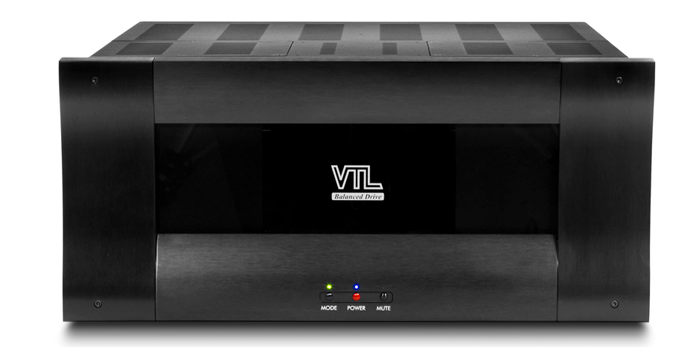 Following the footstep of the MB-450 Series III, the MB-185 Series III Signature monoblock has gone through the same technological improvements as its bigger brother. The upgrade to the Series III platform is extensive with a complete rework of the signal path and new features added while retaining all the user friendliness of the previous model such as automatic tube biasing and comprehensive fault sensing.

Another significant change to the MB-185 is the switch to EL-34 tubes. Long admired for their rich, natural and open sound, the EL-34s bring a distinctive new sonic signature to the amplifier that emphasizes the integration and inner details of music. The output transformer has been completely redesigned and carefully matched to complement the midrange purity and quick, taut bass of EL34s.

There is also a new user adjustable Damping Factor Feedback control that allows the user to adjust the amplifier’s output impedance by varying the amount of negative feedback. Impedance can now be precisely set to suit the listener’s taste, and to improve control of the loudspeaker loads to deliver best performance.

The 4 possible settings are:

“The sense of live musicians in their room and now in yours is again spookily real … as in being at a live performance, detail is imminent as a naturally occurring aspect of the artists at work in a specific acoustic space and time. It is the actual physical presence of the amps themselves that can never be discerned. The VTLs instead ultimately give primacy to and serve wholly the performer and the performance. It is as if the glass fascia on the front of the amplifier’s casing is a window into that musical event, the tubes illuminating that performance, with seemingly infinite colours and washes of tone.”

”The VTL MB-185 Series III Signature amps, especially when mated with the highly sympatico VTL 6.5 Series II Signature tube based preamplifier, equally distinguished by its accurate tonal balance and rhythmic prowess and linearity, results in a system of amplification that has managed to bring out the best in every speaker I have to date hooked them up to, from big Wilson Sasha 2s to little Harbeth monitors. No glare, no listener fatigue. Just a whole lotta musical satisfaction going on.”

The 12th Annual Positive Feedback Writers’ Choice Awards for 2015 – The Best of the Best!

I heard a large variety of gear this year, having attended both T.H.E. Show Newport, actually located now in Irvine, and RMAF in Denver. Mentally rewinding all that now, and searching for common denominators between this year’s models and previous encounters, certain touchstones emerge. You can tell a lot about high-end manufacturers by the company they keep. People who design and produce high-quality audio products obviously want to partner with other products that will make them sound great in a show setting. In other words, it is not a random coincidence that several of the systems I have connected with most positively over time at varied venues contained electronics from VTL Amplifiers Inc. I admire audio companies with real track records, as Luke Manley has been creating since 1987 with Vacuum Tube Logic. The company name says it all. VTL’s focus has been on creating very high-quality tube-based amplification gear from the get-go, with those designs refined over time.

At the 2015 RMAF I spent some time with the VTL MB-185 Series III Balanced Signature Amplifier. These hefty looking monoblocks put out 140wpc in triode mode, or 300wpc in tetrode, into 5 ohm loads. That is a lot of great tube juice, capable of driving loudspeakers with aplomb, even the tough customers load-wise. And the VTL’s do this with a S/N ratio of -90dB. One of the updates in the current model is the utilization of EL34 tubes, 8 per channel. In my experience this tube type delivers a punchy and strong sound, almost ‘poppin’ if you will. And this is in line with one of VTL’s design goals, as stated clearly on their website—power. These are not your aunties little flea-circus monoblocks, but some Big Dog units that brought the Wilson loudspeakers I heard them driving to heel. They can bark, but they can also purr- I heard the most minute and delicate textures, as well as white-hot fireworks, depending on the music. In the RMAF room the VTLMB-185’s were partnered with their VTL preamplifier siblings- the VTL TP-6.5 Signature Phonostage ($12,000), and the VTL TL-6.5 Series II Signature Linestage preamplifierlifier ($15,000). This is not meant as a full-scale review, so I refer readers to the VTL website for more detailed information: https://vtl.com

…For my musical tastes and in my system, the ‘185 IIIs’ combination of musical grace, structural insight and articulation, their ability to reveal the interplay of musical phrases, textures and tonality, their sheer rhythmic dexterity and effortless ability to track changes in pitch and tempo, make them a musical joy.”

“The ‘185s deliver a natural perspective,a beautiful sense of acoustic space … and a beautifully separate and focused solo instrument. They allow Yepes his full expressive range, his notes and phrases their full shape and spacing, a master class in lucid precision. But they also embrace the sudden shifts in dynamic density that allow the music to jump and surprise, they traverse the astonishing changes in rhythm and tempo without hesitation or restraint.”

“This is an EL34 amp done right; in fact, make that done very right indeed!”… Read the full review here…

…After you listen to the MB-185 Series 3 Signature amplifier, you will not be thinking about a comparison between a solid state amplifier versus a tube amplifier. The reason is that the sound of this amplifier very simply shows you what live music is all about. There is no artifice, no individual sonic character that stands out. Whatever music you are listening to, the MB-185 will give you a faithful representation… Read the full review here…

… I have to say that we probably have before us the best VTL “finale” (the best power amp) ever. Obviously I don’t want to say that the MB-185 trumps comprehensively the Siegfrieds which cost so much more (which remain possible for so few of us). Let’s just say that I am beyond curious to hear an eventual version of the Siegfrieds provided with the same improvements … But as I think again, this may be something that would be better not to know at all! Surely I must let VTL know how much I appreciate how it has constantly improved a project that it began a good thirty years ago while remaining faithful to the genial simplicity of the original circuit, introducing in various phases improvements in the ease of use, in dependability, in the maintenance of the tubes themselves (I’m referring here to VTL’s autobiasing), and this time (with the MB 185) reaching theoretical perfection for an tube amplifier of great power with balanced circuitry and no global feedback.

…the MB-185s beat my beloved 225s right across the board. The 225s have no superiority to speak of compared to the 185s. The latter have better bass, quicker with better damping, the mids sound more precise, and the highs are lighter and airier. I prefer tetrode operation, but some may still find the triode capabilities of the 185s to their taste. I played with the feedback options but went back to the default immediately. Nevertheless the opportunity VTL provides listeners to intervene and vary the amplifiers’ performance subtly (via the DF switches) are commendable. Read the full review here…

Call them “retro” for their use of EL34 output tubes, but VTL’s new MB-185 Signature Series III monoblocks sounded anything but old school driving a pair of Avalon Indra speakers. All the treble and midrange splendor of EL34s were present, along with potent bass drive. Read the full report here…

…The ‘450s’ new little sibling, the ‘185, is based on the ‘450 but reworked to make the most of the EL34 power tube. A well-made EL34 is one of the gold standards for high-end, hand-wired guitar amplifiers and has a delightful sweetness and delicacy that, backed by a traditionally stiff and overbuilt VTL power supply, yields nothing in the way of traction and oomph in the lower ranges. The ‘185-anchored system was immediately inviting, very much a “pour a glass of wine, put on some tunes and relax” system. I can’t imagine any real music lover not falling in love with the perfectly wonderful sound this system produced. Read the full report here…