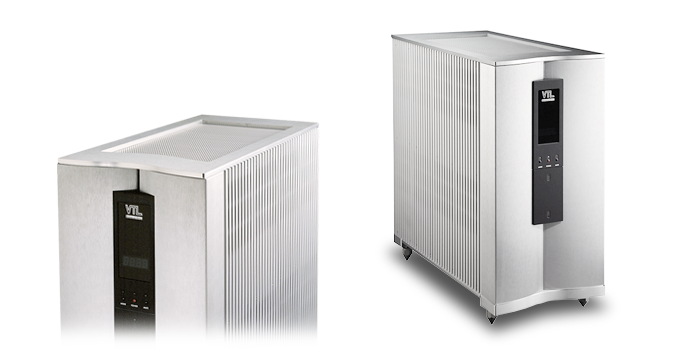 Since its introduction in 2003, VTL’s Siegfried Reference monoblock amplifier has been recognized as the leader in the world of high power, high performance amplifiers, both for ease of use and musicality. Known as the first tube amplifier to deploy true Auto Bias and Fault Sensing, as well as precision-regulated power supply technology, the Siegfried amplifiers have won the loyalty and appreciation of serious music lovers around the world.

The new Siegfried Reference monoblocks gain further sonic benefits with a shorter, faster and fully balanced negative feedback loop, with zero global negative feedback. The negative feedback loop completely eliminates ringing and requires no capacitor compensation to maintain critical phase integrity and information. The result is an amplifier that remains stable even under the most demanding loads.

Another new feature is a user adjustable Damping Factor feedback control that allows the user to adjust the amplifier’s output impedance by varying the amount of negative feedback. Impedance can now be precisely set to suit the listener’s taste, and to improve control of the loudspeaker loads to deliver best performance.

The 4 possible settings are:

Even a brief listen to the new Siegfried Series II monoblock reveals the successful implementation of the new technology. The mid bass has more authority and control while the critical midrange exhibits a new effortlessness in reflecting the natural instrumental colors and timbres. This greater sense of ease and control of the critical mid bass and midrange area enables the top end to sound completely natural and unconstrained.

With its massive power handling capabilities, the Siegfried has always excelled at delivering effortless speed, dynamics and real control in the bottom end, with an almost organic bass quality. With this new version, even at low level listening one can enjoy the nuances and micro-dynamics of music. The Siegfried II scales up from handling the smallest intimate performances to the largest orchestral fanfares with ease. It strikes the perfect balance between seemingly endless weight and authority, and effortless finesse.

…it excels at delivering a vast image with tremendous control over the individual instruments, each textured and layered in the hall.”

“This amplifier offers an experience.”

“It isn’t simply a pleasure to listen to but a delight.”

“VTL has produced an amplifier that comes about as close to doing it all as anything on the market.”

In listening with Luke and Bea, I was struck once again by the sweep and command, rich textural sonority of the amplifiers, whether it was reproducing Anne-Sophie Mutter on solo violin or a prized Decca LP recording of Benjamin Britten and Mstislav Rostropovich playing Schubert’s Arpeggione. The impact of the piano and the plangency of the cello truly were riveting. You can really hear how well these high-powered beasts lock onto the Wilson’s 13” and 15” drivers – no problem with damping factor here! ”

“If you take a look inside, the parts quality and craftsmanship are impeccable. For tubed high-power, this modern design is attractive, reliable, and, above all, sonically extremely enticing.” Read more here …

After having lived with the Siegfried IIs for a month, not only did the amplifiers impress myself and our group of writers [at AudioTechnique], but our friends from the recording industry who brought over their new recordings to our listening room for the final pre-production sound check also learned a lesson. Their first impression was naturally influenced by the look of the amplifier – such a huge and heavy tube amplifier made in the US and using 12 tubes per monoblock – there is no doubt that the amplifier would sound powerful and dynamic, but what about refinement and musicality?  Would they be lacking in these aspects?  A series of such questions would follow … however, after I played them a range of different music, their reaction would be shocked and then followed by praise.  No matter whether I played music fast or slow in tempo, popular or classical music, small chamber or huge orchestral music, they heard more clarity, greater inner detail, the instruments closer to live, main theme and background easier to differentiate, the richness in the texture and timbre etc. are all areas which are difficult to find fault.  Some of our friends naturally expressed their disbelief and asked “Are these really tube amplifiers?”  In our magazine’s listening room, the Siegfried II driving the Evidence Platinum convincingly demonstrate that these are truly high end products that are worthy of their cost.”

“During the period when the Siegfried II resided in our listening room, everyone who has heard these amplifiers has given them high praise.  Regardless of the type of music you are playing, they will give you delicacy, romance, beauty, and passion.  When we played the Taiko Drum recording, the huge drum that exploded as if from the depth of the earth shocked us –the palm of our hands started to perspire.  For the price of $715,000 HK per pair is not inexpensive, however, when you think about the detailed and intricate design, and the total dedication with which the product is manufactured, plus the superior sound that is so hard to find fault, I still think that this product is well worth its price.  The only question is whether you have the room to accommodate this pair of great sounding little giants.” Read the full review in Chinese here …
Read the full review in English here …

But perhaps more pertinent, the Siegfried IIs deliver music with detail, suppleness, authority and finesse — from top to bottom, no matter the speakers with which they are used … the Siegfried IIs go beyond well and into transcendent territory. Voices were always full and vivid, instruments rich in timbre, their tonality remaining individual and true no matter the demands of the recording … About four years ago, shortly after The Audio Beat first appeared, I mentioned in one of my reviews an amplifier top-five list — a personal tally of the best amps I had heard regardless of price or technology. … And now at the top of that list sits the VTL Siegfried II. Read the full review here …

Remarkably quiet, wideband, as linear and tonally neutral as the best solid-state amps, and with just a kiss of the effortlessness tube lovers find so addicting, the VTL Siegfried II was as neutral and as uncolored as any tube amp I’ve listened to.”
“…the Siegfried’s bottom-end performance was so good that I never felt the need to switch back to the darTZeel NHB-458s for one of my many evenings of listening to rock. In addition, it gave nothing away in terms of overall speed and transient clarity to achieve its impressive power output.”
“If I had to describe the Siegfried II’s overall sound in one word, I’d choose creamy. But that creaminess wasn’t overly rich… the Siegfried was more coherent and delivered greater upper-octave sonic sophistication.” Read the full review here …

… The new Siegfried thus couples a majestic soundstage with a sumptious level of finesse and bloom to offer a musical experience that lingers in the ear long after the notes themselves have faded away.

…Did I have a favorite room at the show? Yes, the Brooks Berdan room that I visited after hours, and that paired the VTL Siegfried IIs with Wilson W/P Sashas, state-of-the-art dCS gear, and Cardas Clear cabling. (I did not hear the vinyl component in this room). It wasn’t the most neutral sounding room at the show, but it was a revelation. Not only was the soundstage awesome—okay, an overused word, frighteningly Valley Girl, yet entirely apt in this instance—with mesmerizing, all-enveloping images extending way up the ceiling, but the system also had the ability to reveal the inner emotion of music. What more can you ask for than a revealing, honest system than enables you to feel the heart and soul of the music, and share in the very act of creation? … Read the full report here…

Time and time again, I’ve had the good fortune of running into VTL’s Luke Manley just as I arrive at a show. It’s always a pleasure to chat with Luke and just as fun to listen to music with him. While his room often represents my very first chance to listen at any show, the sound he and his partners create is one that stays with me for the duration. That was the case again here at T.H.E. Show Newport Beach.

This time, we heard VTL’s Siegfried Series II Reference monoblock amplifiers ($65,000/pair) driving Wilson Audio Sasha loudspeakers ($27,900/pair). The linestage was VTL’s TL-7.5 Series III Reference ($20,000), and, for vinyl, VTL’s TP-6.5 phono stage… Tempo High Fidelity’s John Quick played an interesting track called “Oh Pretty Boy, You’re Such a Pretty Boy,” from Menomena’s Mines, and, before anything else, I heard the singer inhale. It was a brief moment, filled with potential. I knew right away that I was in for a treat. This music was alive. It was more than just the weight of the music, more than just the quick, agile, definite starts and stops, though those things were impressive, too. It was the sense of anticipation before each plucked string, each melodic twist and turn—a traction, force, and utter control that not only made listening exciting and enjoyable, but made me feel like an essential part of the music-making. This is a musician’s system. A music-lover’s system.

… As with a system set up at THE Show Newport and the California Audio Show, top-level VTL electronics — including the Siegfried Series II monoblocks ($65,000/pair), TL-7.5 Reference Series III line stage ($20,000), and TP-6.5 Signature phono stage ($8500) — drove Wilson Audio speakers, this time the brand-new Alexia ($48,500/pair), to produce one of the show’s superior sounds. But that’s something of a misnomer, as this system was truly about the totality of the music, not the parsing of sonic traits … We spent the final hour of the show listening to this system with our music, as well as whatever Luke Manley and Bea Lam of VTL wanted to play. Analysis mode was disengaged, as we played everything from Randy Newman to Peter Gabriel, from János Starker to Keith Richards — either CD or LP. The system handled it all, sounding flawlessly adept with any kind of music. That was ultimately the impression we were left with — one of true musical proficiency and versatility.

… The IIs do every single one of these things better than the original Siegfrieds. And on a gestalt level, the IIs provide a sense of limitless power, musical/harmonic authority, and ineffable nuance.

…What I can tell you is that if you own the originals, then get the upgrade, even if it takes a(nother) mortgage. And, if you auditioned the original Siegfrieds, loved their naturalness and musicality, but, perhaps, wanted more transparency, transient speed, musical authority, or power, then get to a VTL dealer to experience the IIs… Read the full comments here…

…. I can advise that your amps ROCK! There are so many areas of improvement, that span the spectrum from lowest octaves right up through to the stratosphere, that comments on tonal changes become irrelevant. These amps are just as wide open and transparent (pardon the over-used pun) that one is aware of music from a totally different frame of reference. Now I find myself listening to the complexities of the musical performance and how instruments are being played or vocals sung, rather than to the sound per se. I think this is a major step up from anything I have previously enjoyed because it is on a totally new level. I find myself listening to a wider range of music and immediately being engaged and getting involved in it… it is a cold & rainy day so I am off back into the listening room to spin some more vinyl. Well done to all the team… a triumph !