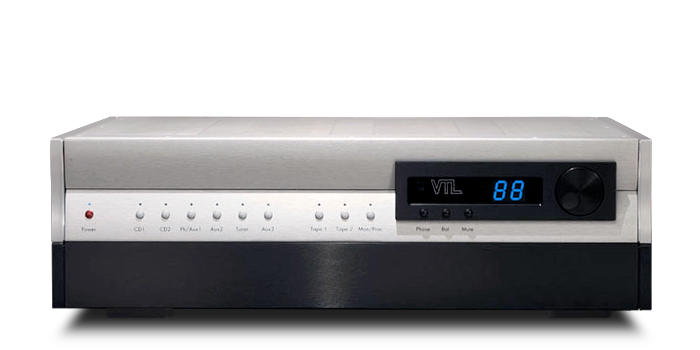 More than seven years after introducing the TL6.5 Signature Preamplifier to wide acclaim, VTL presents a significantly revised version, the TL6.5 Series II. The new model incorporates numerous circuit improvements while retaining the best elements of the TL6.5 platform. The proven strengths of the original system design include a single chassis architecture, a fully balanced differential design, a hybrid circuit that combines tubes in the gain stage for voltage linearity, with a FET buffer for greater current capacity, a high resolution volume control with high overload capability, and precision-regulated power supplies. The highly-regarded user interface of the TL6.5 platform is renowned for its intuitive functionality and ease of use, with full-function remote control, and a fully bi-directional RS-232 control interface for increased compatibility with modern home theater systems.

The completely redesigned high current gain stage utilizes newly available FET technology developed for green technologies such as solar panels and electric cars that require a normally-on state. Unlike MOSFETs that need to be biased on, normally-on devices operate more like vacuum tubes in the audio output stage, with simpler circuits that continuously conduct current, resulting in a more tube-like sound. The high-current gain stage is shock-mounted like the TL-7.5, and has been further optimized for linearity, with zero global negative feedback.

Also included in the upgrade are re-voiced audiophile grade capacitors and additional bypassing.

Enhancements to the Series II result in an overall more tube-like sonic character, with more defined images in the listening space, a higher level of inner detail, and a dramatically improved mid-bass and midrange. The TL6.5 Series II is an exceptional match with any of VTL’s other Signature products.

“It (TL6.5 II) has added serious low-frequency extension and grip to the mix, moving it far closer to the flagship 7.5 in overall performance.”

“The S-200’s neat trick is to deliver a realistic impression of weight and scale, pitch and extension.”

“The VTLs performance matches what is an expressive and dynamic tour de force. Repin and Argerich … their playing is at once intimately conjoined and dramatically bold. The VTLs paint a richly vivid musical picture, full of body and presence, light and shade. The instruments are held separate in space, with a beautifully natural sense of differential height and scale, surrounded by a convincing acoustic space. The connection between the musicians is as tangible and articulate as the interlocking phrases of the piece, sure sign that the amps have got the timing spot on.”

“Spending time with these VTL amplifiers, it is easy to understand how and why the company has quietly but confidently established itself as the go-to option for versatile, high-powered tube amps. The TL-6.5 and S-200 don’t just tick the boxes – they own this turf!”

“Put the latest ‘6.5 alongside the original version and what you’ll hear is a quieter, blacker background, deeper bass and crisper, quicker dynamics. Bottom-end pitch and textures are clearer, and the Series II throws a much more developed and clearly defined acoustic around and beyond the orchestra … Instrumental separation is better (tonally and spatially), while melodic lines are clearer and more fluid, that newfound clarity in the bass bringing organization and purpose to the midband and treble.”

“This ability to cut to the musical core, to fasten on the expressive and emotive center in a recording — whether the recording itself is of audiophile grade or not – makes this a product for those with a genuine interest in and a system focused firmly on music.”

“I wonder too just because we know now for almost twenty years the seriousness with which Luke Manley and Bea produce their products; having already experienced the passage of 7.5 from Series II to III, I had a pretty good idea of what to expect; but, I repeat, the TL 6.5 II surprised me, the improvement over the old model goes beyond the most optimistic predictions, even reducing to a minimum the difference with more expensive and magical TL 7.5 III. VTL has struck again!”

If the previous (Series I) was a bargain at the time compared to the products of other vendors, this TL- 6.5 II brings the sound to realism due primarily to three parameters: rhythm, sound and spatial imaging. A revolution made by Luke Manley and Bea Lam for their wonderful, musical and technological products. To understand what a great step forward has been made, it should be pointed out the significant difference that exists between the two models being tested. In this listening sessions … was reinforced in me the idea of great seriousness of this product, In the case of VTL TL 6.5 II brought about a new standard for line preamplifiers, we’re on new parameters of sound reproduction that also differentiate them from the competition.”